You have the right to remain silent. Use it – but wisely. 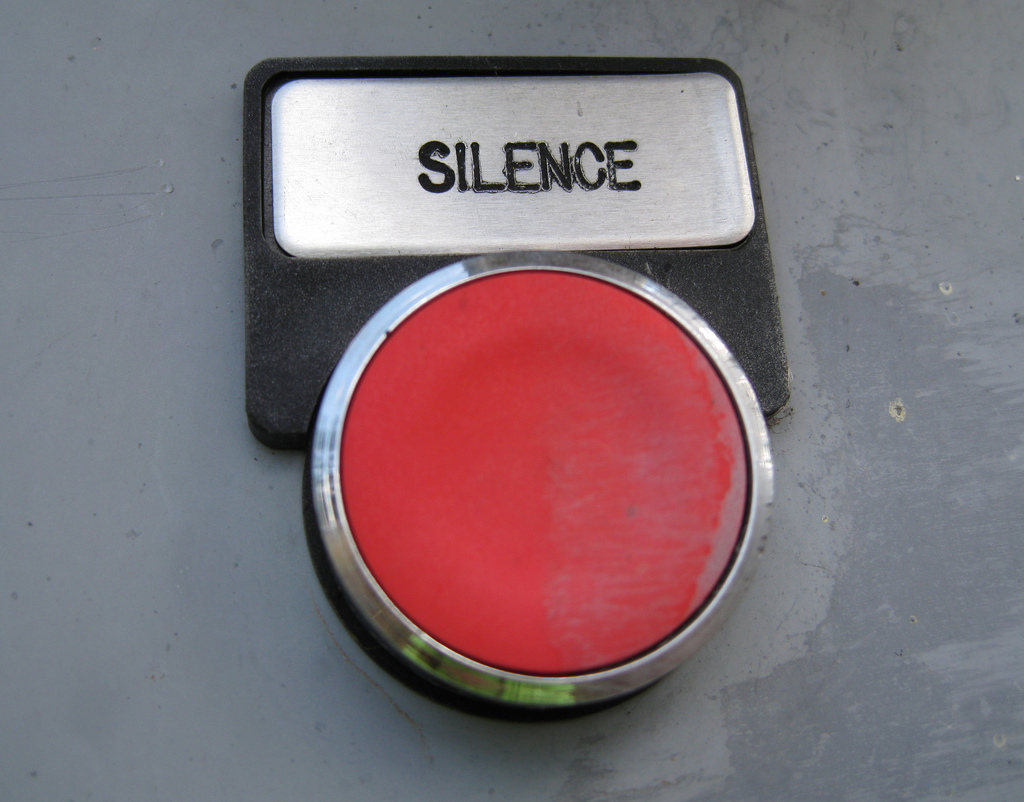 A young friend of mine recently demonstrated that actions truly can speak louder than words.

She and some girlfriends were at a nightclub, enjoying themselves on the dance floor, when a young man decided that Elizabeth and her friends shouldn’t be wasting time dancing with each other. He started invading her personal space in a bid to get her to dance with him instead of her friends.

Now, Elizabeth likes young men just fine; she simply didn’t like this one or his behavior. Instead of trying to talk over the music to indicate her profound lack of interest, she simply turned to him, put the palm of her hand over his face, pushed him away, then went back to having fun with her girlfriends.

Now, I will admit there might have been just a tad of alcohol involved in decisions that night, but I still can’t help admiring the clarity and effectiveness of Elizabeth’s choice of action. And, even though this incident took place away from work, there are some good business lessons to be learned from her example.

Henry Ford once observed, “You can’t build a reputation on what you are going to do.”

Obviously, talking through a possible course of action with trusted advisors has a lot to recommend it. By doing so, you’ll be able to anticipate and avoid at least some potential pitfalls.

But there’s a big difference between talking as a way to process your thoughts and talking as a substitute for action. If you do nothing but talk, not only will you fail to produce the results you desire – you’ll also teach people to ignore what you say because you’re “all talk and no action.” (Obviously, Elizabeth went the route of “no talk and all action”.)

Lewis Cass certainly had it right when he said, “People may doubt what you say, but they will believe what you do.”

Toot your own horn, but avoid any false notes.

I love this pithy recommendation from Henry J. Kaiser: “If your work speaks for itself, don’t interrupt.”

I feel this speaks directly to the tendency of some people to go on and on about their accomplishments. Whether this is insecurity, ego, or something else, it can be annoying for those of us listening to it.

While bragging or embellishing the truth ultimately will come back and bite you on the butt, claiming your strengths is something else entirely.

At the risk of sounding sexist, far too many talented women downplay their talents and achievements for the sake of being polite or socially acceptable. If you do this, you’re disrespecting yourself and teaching people they don’t need to acknowledge your strengths, either.

My young friend Elizabeth certainly put effort into looking her best that night she and her friend went dancing; she was, in a sense, tooting her own horn. But she did that for herself, not with the purpose of getting noticed by any of the male club-goers. And when that guy assumed she had issued him an invitation when, in fact, she hadn’t, she was very clear about letting him know he was mistaken. She was true to her intended goal for the night: fun with girlfriends.

Be both authentic and considerate of others.

You may sometimes find yourself feeling caught between authenticity and consideration.

If a client cancels a meeting on short notice yet again, your natural inclination may well be to verbally unload on her. However, since you know that this short-term relief will likely have long-term negative consequences you don’t want to deal with, you may find yourself making excuses for her and pretending it’s no big deal.

What you get to remember is that it’s your right – and your responsibility – to respect yourself as much as you respect anyone else, be they clients, prospects, vendors, colleagues, friends, or family.

The trick to being both considerate and authentic is to know how to set appropriate boundaries with others. Boundaries are appropriate when they:

Elizabeth was acting with complete authenticity when she non-verbally declined the young man’s invitation to dance. Was she considerate? Not so much; this area needs a bit more work on her part. But in my opinion, she had this next lesson nailed down tight.

Don’t let being “polite” get in the way of respecting and honoring yourself.

Even today, young women are typically expected to be flattered if a young man shows interest in her. It’s considered the polite thing to thank him for the attention, or at least to not actively reject it. But, in Elizabeth’s case, she wasn’t flattered; in fact, she considered his behavior an unacceptable intrusion on her good times.

You may be one of the many people for whom it’s still too easy to end up disrespecting yourself, your goals, and your boundaries for the sake of being polite or prudent. Rather than rock the boat, you’ll put another’s agenda and wishes ahead of your own.

This sort of behavior is really, really dangerous.

The potential problem is that it can be easy to hesitate to say something if you don’t want to hurt the other person’s feelings. This is what I like to call a control fantasy, because you are not the one in charge of anyone’s emotions other than your own.

It takes courage to say something which, even when said with emotional neutrality, is likely to not be received well by the other person. The trick is to remember that every single person you interact with has the right – and the responsibility – to choose how they react.

Exercising your right to remain silent requires making a judgment: Will remaining silent help or hurt you? If you choose not to remain silent, how can you say what needs saying in a way that respects the other person and yourself?

Do you realize that you’re already doing a darn good job of remaining silent when it serves you well? If so, woohoo for you! Please share one of your success stories in the Comments section below so the rest of us can try out your technique for ourselves.

Or do you realize that some of your communication habits are getting in the way of your success? If that’s the case, I’ll bet I can help.

I specialize in helping entrepreneurs stop sabotaging themselves by showing them how to get rid of counterproductive habits. Whether that habit is procrastination, flitting from one activity to another, or not communicating clearly, we work together to identify those habits and develop ways to change them to success habits.

Is this something I can do for you? Probably. Would it be in both of our best interests to work together? Don’t know. But we can both find out through a no-charge, no-risk, get-acquainted call.

Just grab a spot in my calendar and we’ll explore the possibility of working together. By the end of our call, we’ll both be confident in our decision, whether that’s to wish each other well and say good-bye or to jump in with all four feet and start kicking business butt.

If you’re feeling stalled, this is not a good time to remain silent. Take a stand for yourself and your business success: Set up that call and get back on track.

(By the way, thanks to Shawn Rossi for posting the “silence” image in the Creative Commons section of Flickr.)

This entry was posted in effective communication and tagged mindset, personal power. Bookmark the permalink.