What’s the worst that can happen?

The other day, Joseph (my hubby) went in to purchase an amp for his electric guitar. While he was willing to spend the money on it, he naturally wanted to get as good a deal as 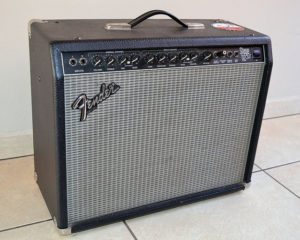 So when he found an amp, he told the clerk he’d budgeted to put the purchase price of $100 on his card and would pay the tax in cash.

Then Joseph included a brilliant addendum: “Unless you want to round the whole thing down to $100.”

And the clerk thought a moment, then said the magic words: “I can do that.”

How cool is that?

Think about it: Joseph simply tossed out an idea – that the store essentially pay the sales tax on his purchase – to see what kind of response he would get. He didn’t get hung up on whether he “should” ask or not; he simply took action and was willing to roll with whatever answer he got.

Is this a big deal and an important business lesson because of the $7 he saved? No – although saving money is always fun.

It’s a big deal because it illustrates the power of one tiny word: “ask”.

If you don’t ask, the answer is ALWAYS “no”.

Why do we so often hesitate to ask for what we want? While there are many “reasons” (AKA excuses) not to ask for what you want, I believe most of them boil down to a double whammy of self-sabotage: not wanting to deal with the discomfort of asking and getting hung up wondering “what if they say no?”

If you’re a typically creative entrepreneur, you’ve probably been able to come up with some of (all? more than?) the following rationales not to ask:

How’s that working for you?

If the answer is “not very well,” here are five strategies for dealing with that wussy little voice in your head that keeps you from asking for what you want.

Awareness is always the first step in changing a counterproductive behavior, so get serious about cluing in to when asking is a challenge.

Notice not only situations in which you fail to ask; also pay attention to the story running through the back of your mind about those situations.

For example, someone might have gone to buy that amplifier without it even occurring to them to ask the store to eat the sales tax. Assuming it had occurred, the following stories might have started swirling:

We all have stories – and all too many of them hold us back rather than propel us forward. That’s why it’s vital to commit to strategy number two.

This is another powerful cognitive tool to enable you to become more comfortable asking.

For every story/reason/excuse that pops into your head, come up with a rebuttal. For example, here’s how you could respond to the “I’m not asking because…” stories in the amplifier situation:

While you can – and deserve to – experience success with these first two techniques, you can speed things along by adding a bit of what some people call “woo-woo” to the mix: Simply expect your request to be granted.

Does walking into a situation with positive expectancy mean you’ll always get what you ask for? No.

What it does always mean is that you’ll be building your courage so you’re more willing to ask in the future – and it often creates the success you’re envisioning.

Detach from the outcome.

This one is tricky for me, but I’m getting better at it.

It’s too easy to approach situations with a “gotta have it” attitude, along with its corollary of “It’ll be just horrible if this doesn’t work out the way I want!”

Some people (of which you are hopefully not one) are skilled at turning a simple disappointment into a catastrophe – one with horrendous consequences if they fail to get what they want.

Maybe it’s time to pull up the big-person panties and accept that sometimes you get what you want and sometimes you don’t – and it’s all manageable.

Let’s be honest: Given that you’re still alive, there’s literally nothing that’s come your way that you haven’t been able to handle. When you consider all the tough stuff that’s part of most people’s lives, getting a “no” response to a request is barely even a gnat bite – so why not make the request anyway? You’ll either roll with a “no” or celebrate a “yes”; regardless, you’ll be fine.

So…Does this sound like something you can use to step into the power of asking? Or are there so many “yeah, but…” thoughts running through your mind that you can’t quite see how to make these tools work for you? If that’s the case, I can help.

I show stuck entrepreneurs how to ditch the counterproductive, self-sabotaging habits they’ve gotten into and shift them into new habits that get them where they want to go.

Is this something I can do for you? Yes. Would we both be happy about it? Don’t know right now.

What I do know is that you can’t afford to let fear of discomfort keep strangling your success. Are you courageous enough to grab a spot in my calendar for a no-risk, no-charge, get-acquainted call? We can ask and answer some questions to determine if we’d work well together.

If the answer is ‘no’, we’ll both be relieved to know it so we don’t try working together and end up wanting to kill each other. And if the answer is ‘yes’, we get to start kicking serious business butt and having a lot of fun along the way. Either way, you owe it to your future success to see if this is the right path for you.

(BTW, thanks to marcelodonati for posting his image of the Fender amp in the Creative Commons section of Flickr.)

This entry was posted in effectiveness, personal power and tagged choice, courage. Bookmark the permalink.