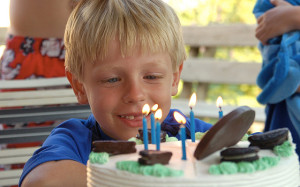 If you read last Thursday’s post, you know that I encouraged you to take the time and effort to craft such a powerful, easy-to-understand marketing message that even a six-year-old would have a good idea of the work you do. (A case in point: A police officer could say, “I catch bad guys.” Yes, I know: sexist, over-simplified, and not politically correct—but it sure manages to convey the basic bottom line, doesn’t it?)

And if you took me up on the challenge in Monday’s offering, you’ve already taken a look at applying three powerful tools to create that pithy message. Now here are three more you can use to amp up the wattage even more.

4. Use stories and metaphors.

Storytelling has probably been around as long as spoken language. Your prospects will inevitably remember relevant stories more easily than they will dry facts. The same thing applies to metaphors; a good one will paint a picture in which your prospect can easily place herself. For example: “An entrepreneur who’s busy but can’t tell you what she’s spending her time on—or why—is the business equivalent of a hamster on her wheel: Always in motion, never getting ahead.”

So when you’re connecting with prospects initially, don’t waste time talking about the nuts and bolts of how you do what you do. Instead, use storytelling to illustrate your problem-solving abilities and making it clear how good your client felt about the results she got from you. The “feel good” part directly relates to the next tool.

Why do we so often forget that our prospects typically buy emotionally, then justify those purchase decisions rationally? Sigh…

It’s not only okay to address emotions, it’s essential to do so in order to effectively cut through the information overload facing your prospects today. Appealing to your prospects’ emotions is not the same thing as manipulating them or somehow being underhanded. Instead, it’s about authentically letting them know how you can make their lives better—and isn’t that what all of us really want?

Ideally, you want to create a true dialogue with a potential client, and you can’t do that if you’re the only one talking.

One of the best ways to create a two-way conversation is to make your listener curious enough to say something along the lines of “tell me more.” At that point, you have permission to go into more depth about your business; just be sure you don’t get so carried away that you drown them in data and make them wish they’d never asked the question to begin with.

So…You’re really not going to be surprised when I challenge you to assess your current “one-minute commercial” for effective application of these additional tools, are you?

And since I’m doing my very best to walk my own talk, here’s an evaluation of my current favorite way to describe Stepping Into Big: “I free entrepreneurs from the guilt that comes from not doing what they say they’re going to do to create the life and business they want.”

2. Appeal to their self-interest: Since the networking events I attend are all geared toward entrepreneurs, the use of the word “entrepreneur” in my sound bite lets the listener know I’m talking about her.

3. Use active voice: “I free” = subject acting out the verb.

4. Use stories and metaphors: Since I don’t want to talk too much in response to “So what do you do?,” I’ll wait until later in the conversation to bring in my hamster-on-a-wheel metaphor and/or client success stories.

5: Get emotional: Using the word “guilt” will cause a visceral reaction of one sort or another in most listeners. The same is true for the phrase “they want.”

6: Arouse their curiosity: Since I haven’t yet elaborated on how I free entrepreneurs from their guilt, I have a good chance of hearing those magic words, “How do you do that?”

What are some ways you’ve found to be effective in sharing your clear, powerful, six-year-old-worthy message?

(By the way, thanks to scott feldstein for posting the six-year-old birthday boy in the Creative Commons section of Flickr.)

This entry was posted in marketing, strategic and tagged effectiveness, promotion. Bookmark the permalink.

8 Responses to The advanced class: Speaking for six-year-olds, Part II